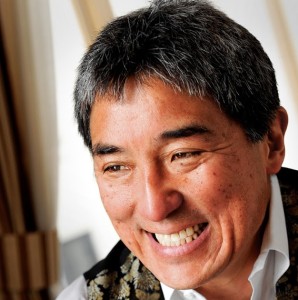 Guy Kawasaki is the chief evangelist of Canva, a graphics-design online service, and an executive fellow at the Haas School of Business at U.C. Berkeley. Formerly, he was an advisor to the Motorola business unit of Google and chief evangelist of Apple. He is also the author of APE, What the Plus!, Enchantment, and nine other books. Kawasaki has a BA from Stanford University and an MBA from UCLA as well as an honorary doctorate from Babson College. Guy’s “Real Story” in His Own Words I was born in Honolulu, Hawaii in 1954. My family lived in a tough part of Honolulu called Kalihi Valley. We weren’t rich, but I never felt poor-because my mother and father made many sacrifices for my sister and me. My mother was a housewife, and my father was a fireman, real estate broker, state senator, and government official during his long, distinguished career. I attended Iolani School where I graduated in 1972. Iolani is not as well known as its rival, Punahou because no presidents of the U. S. went there, but I got a fantastic and formative education there. (Punahou is “USC,” and Iolani is “Stanford”—but I digress.) I pay special tribute to Harold Keables, my AP English teacher. He taught me that the key to writing is editing. No one in the universe would be more shocked that I have written twelve books (or one book twelve times) than Harold Keables. After Iolani, I matriculated to Stanford; I graduated in 1976 with a major in psychology—which was the easiest major I could find. I loved Stanford. I sometimes wish I could go back in time to my undergraduate days “on the farm.” After Stanford, I attended the law school at U.C. Davis because, like all Asian-American parents, my folks wanted me to be a “doctor, lawyer, or dentist.” I only lasted one week because I couldn’t deal with the law school teachers telling me that I was crap and that they were going to remake me. The following year I entered the MBA program at UCLA. I liked this curriculum much better. While there, I worked for a fine-jewelry manufacturer called Nova Stylings; hence, my first real job was literally counting diamonds. From Nova, its CEO Marty Gruber, and my Jewish colleagues in the jewelry business, I learned how to sell, and this skill was vital to my entire career. I remained at Nova for a few years until the Apple II removed the scales from my eyes. Then I went to work for an educational software company called EduWare Services. However, Peachtree Software acquired the company and wanted me to move to Atlanta. “I don’t think so.” I can’t live in a city where people call sushi “bait.” Luckily, my Stanford roommate, Mike Boich, got me a job at Apple; for giving me my chance at Apple, I owe Mike a great debt. When I saw what a Macintosh could do, the clouds parted and the angels started singing. For four years I evangelized Macintosh to software and hardware developers and led the charge against world-wide domination by IBM. I also met my wife Beth at Apple during this timeframe—Apple has been very good to me. Around 1987, my job at Apple was done. Macintosh had plenty of software by then, so I left to start a Macintosh database company called ACIUS. It published a product called 4th Dimension. To this day, 4th Dimension remains a great database. I ran ACIUS for two years and then left to pursue my bliss of writing, speaking, and consulting. I’ve written for Macuser, Macworld, and Forbes. I call these the “Wonder Years” as in “I wonder how I came to deserve such a good life.” In 1989, I started another software company called Fog City Software with three of the best co-founders in the world: Will Mayall, Kathryn Henkens, and Jud Spencer. We created an email product called Emailer which we sold to Claris and then a list server product called LetterRip. In 1995 I returned to Apple as an Apple fellow. At the time, according to the pundits, Apple was supposed to die. (Apple should have died about ten times in the past twenty years according to the pundits.) My job on this tour of duty was to maintain and rejuvenate the Macintosh cult. A couple years later, I left Apple to start an angel investor matchmaking service called Garage.com with Craig Johnson of Venture Law Group and Rich Karlgaard of Forbes. Version 2.0 of Garage.com was an investment bank for helping entrepreneurs raise money from venture capitalists. Today, version 3.0 of Garage.com is called Garage Technology Ventures; it is a venture capital firm and makes direct investments in early-stage technology companies. For the seven years or so, I worked at Garage, wrote, and spoke. My latest book is APE: Author, Publisher, Entrepreneur—How to Publish a Book. (You can read about all my books here. Then in 2013 I became a special advisor to the CEO of Motorola. I happen to fall in love with Android, and I love smartphones so the challenge to help Motorola compete with Apple and Samsung was irresistible. In 2014 I resurrected the title “chief evangelist” and joined a Sydney-based company called Canva. This company provides amazingly simple graphic design in a quest to democratize design. (I love the democratization of stuff: Apple for computers, Google for information, eBay for commerce, and now Canva for design.) If you want to see how Canva empowers people, spend thirty seconds here.

Show Notes: In this episode, Guy shares his power tips for social media and how to get started. He shares with us what people miss when creating a tribe and how social media can be an incredible asset to your business.

Here are some great go to guideline for social media posting:

– Ask yourself, are people going to want to re-post this?

– Create content that’s going to make others look good when they share it. This is across all platforms.

– It is important to show who you are and how things are behind the scenes, however there needs to be balance. If you are new to social media and trying to build a tribe, posting a bunch of selfies wont help you build a following. People want content. And you have to earn the right to bore people with a photo of your dog! ☺

What’s step 1 for someone who is just starting out?

You need to reasonably come up with some kind of purpose or plan. Social media is a great platform to position yourself, so use it to your benefit. Lets discuss an example. Say for example you are a stay at home mom with a background in interior design and you realize that you love putting together outfits and taking old clothing items from your closet and making them new! You think this could become a business, but aren’t sure where to start? Guys recommendation is to start simply by posting things to social media such as before and afters, or images of how to create “this” from “that”. You could also create a video on how to do XYZ and post that to youtube. If you want to post it to Facebook, don’t embed the youtube link. Post it directly to facebook.

How often should you be blogging? How long should your blog post be?

How do we get someone to read our blogs?

– Tweet about it multiple times a day. People are seeing your tweet at different times in the day.

How can we use Canva to improve your blog?

– Canva is an incredible tool that allows you to make incredible images that can be used on your blogs or to promote your blogs.

– All you have to do is go to canva.com and create an account. It’s completely FREE!!

The Art Of Social Media by Guy Kawasaki: http://artof.social

Chalene’s Courageous Confidence Club: www.courageousconfidenceclub.com This program gives you the tools you need to build confidence in every area of your life. You are supported by a group of people who are going through the program with you and are a sounding board for decisions and opportunities. This program will get you unstuck from your current situation and will teach you the steps needed to get your life in the direction you want!

For health and fitness advice from Chalene, head to www.cj7day.com to download her FREE program with complementary workout videos!